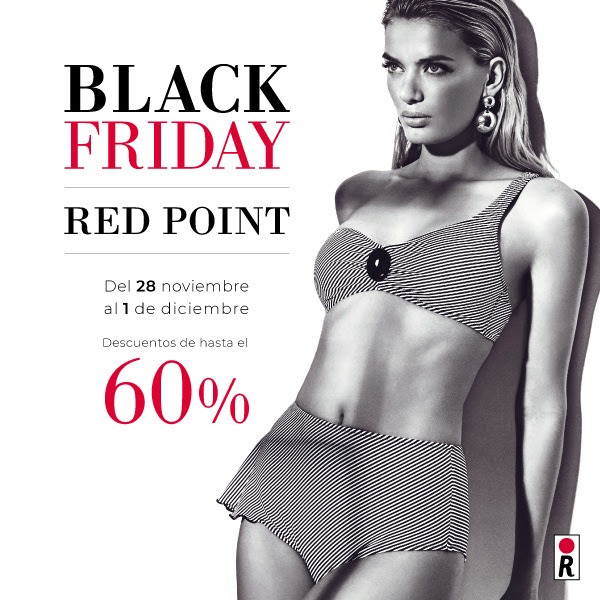 You have already marked the date on the calendar and have even thought about some of the whims that you want to give yourself on November 29, taking advantage of the “World Shopping Day” or, as it is best known by all, Black Friday. In the Red Point online store we have prepared discounts that will not last only 1 day, here they last until December 1.

It is a date expected by many to make their purchases and Christmas gifts at the best price. Therefore, at Red Point we will have our entire collection of bikinis, swimsuits and accessories with discounts of up to 60%.

You can find printed bikinis as beautiful as our Quepos model, colorful swimsuits for your beach or pool days like the Omis model, and, of course, a whole line of swimwear in black, to fill Black Friday with elegance and sophistication .

So you know: sign up for the date on the agenda and enjoy the "Black Friday" of Red Point.

Everything you have to know about Black Friday

But beyond knowing that it is a shopping day with discounts, do you have any idea where he was born or why his name? If the answer is no, in addition to making your day happy by telling you that from November 29 to December 1 we will have discounts of up to 60% in the entire collection of Red Point bikinis and swimsuits, we will discover some curiosities about this date.

What is the origin of Black Friday?

Black Friday or "Black Friday" emerged in the United States, more specifically in Philadelphia, just during the economic crisis in the 1930s.

Due to the bad situation experienced at the time, thousands of merchants were forced to declare bankruptcy. Bad tongues say that it was a brilliant idea that a merchant named Fred Lazarus Jr. had (considered the creator of the first sales) that changed everything.

Seeing that the stores were left with many unsold garments, Lazarus thought that a good alternative would be to lower the price of the products to give them output. And he triumphed! So much so that he managed to convince the President of the United States, Franklin D. Roosevelt, to advance a week on the calendar the celebration of Thanksgiving with the aim of having more days of sale for Christmas.

And that's how Black Friday came about! A shopping day where you will find what are probably the best discounts of the year. It is celebrated on the last Friday of November, after Thanksgiving, and it is the day that officially kicks off the Christmas season.

Why is it called Black Friday?

Have you ever wondered how and why it ended up calling itself "Black Friday"? The truth is that there is no definitive answer to this question, what does exist are several hypotheses that explain the origin of the term Black Friday.

Some say the name was coined by the Philadelphia police force to refer to the chaotic traffic that formed in the streets the day after Thanksgiving, when people went out to buy massively collapsing the roads. Agents called this day the "black day" for the large number of incidents that occurred.

Others say that the name was created by the merchants themselves to refer to the success of the day. For them, this was a day that came loaded with positivism because, thanks to numerous sales, the establishments went from the red numbers to the black numbers in their accounts. That is, it was a day when they had benefits again.

• Black Friday did not become popular in the rest of the United States until the 1990s and did not arrive in Spain until 2012.

• Did you know that there are people from all over the world who even camp at the doors of the stores to be the first to get the best discounts?

• Technology is the most sought after on Black Friday ... but what sells the most are pajamas and lingerie.

• Black Friday is a date on which absenteeism rates are especially high ... why will it be?